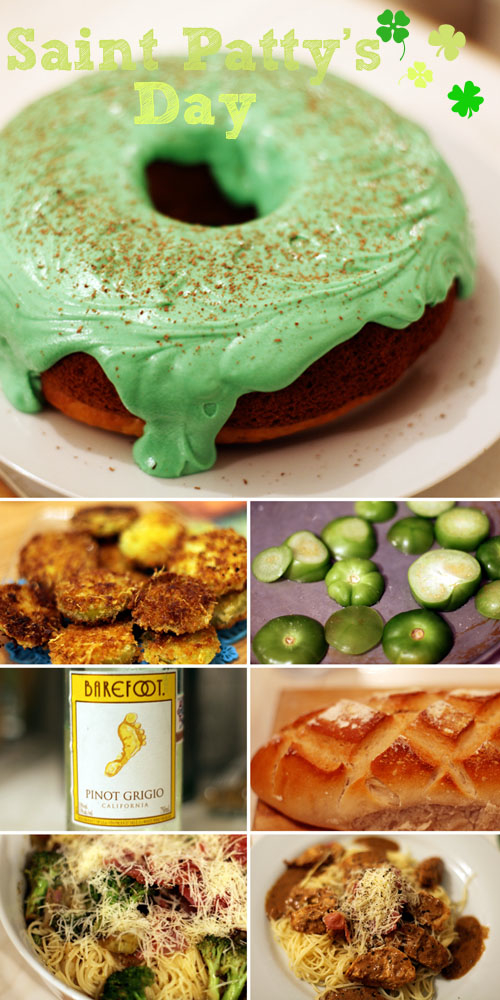 Okay, gang, I have the flu, so don’t expect Pulitzer-worthy material from me today.

Here’s the rundown: St. Patrick’s Day came and went with a whinny and a whimper.  Rene came over in the afternoon to hang out, I bought the last four Guinness in Playa del Carmen, we drank none of the Jameson’s that I bought (well … I did after he went home …), we called it a night at about seven in the evening.

Yes, I know, my Irish ancestors are calling me a pussy from their graves, but what can you do?

The next day, I ignored the tell-tale flu-like symptoms that were wracking my body.  I went to the grocery store, bought some supplies for the night, and hightailed it home.  I skipped my Sunday haircut, since my favourite stylist moved back to Guadalajara and I don’t trust people with scissors easily.

So far so crap, right?

Megan and I had decided to make a St. Patrick’s Day-themed dinner.  So, not necessarily lamb stew and soda bread, but something along those lines.  (Okay, nothing along those lines, but those ingredients are really hard to find down here, so bite me.  I’m sorry guys, I’m just grumpy.  Friends?  Nice.)

I bought cake mix and food colouring.  My idea was to make a green cake that Megan would supply with green icing.  I got home, made the batter, put it in the oven … Taking into account all of the failed attempts I’ve made at baking, I was really happy with myself.  So far, no problems.  I even improvised a bit and added Jameson’s to the batter to give it a more Irish taste.

What’s that, you ask?  How did it turn out?  Actually, really well.  Except that I forgot the food colouring.  Oh well.  Next year.

Yep.  Bailey’s Icing.  Jameson’s in the cake, Bailey’s in the icing.  (I’m pretty sure that’s an actual Irish drinking song.)

The chicken with the Jameson’s Butter Reduction was for Rene.  He doesn’t care for pesto, or vegetables, so we made a dish especially for him.  He loved it.  We were chuffed.

Did we overdo it on the Jameson’s this week?  Well, we didn’t drink any, so I don’t think so.  Also, what did your St. Patrick’s Day look like, Judgy Judgerson?

So the cake … it turned out looking like a giant doughnut, since we shaved chocolate on the top and ate it and it was awesome and you could totally taste the Jameson’s and my baking didn’t ruin Christmas!

Plus, the wine we picked was perfect for this meal.

This is one of the easiest wines you will ever have the pleasure of drinking.  Perfect for warm summer nights, pasta, chicken, or even Mexican dishes.  The lightness and subtle acidity goes really nicely with spicier foods.

Green apples and hints of peaches leave your palette feeling refreshed.  Not too sweet, but definitely not dry, this wine would make and absolutely smashing spritzer.  Or white wine slushy.

Okay, that’s all I’ve got.  Me head is pounding and I canna feel me hands! 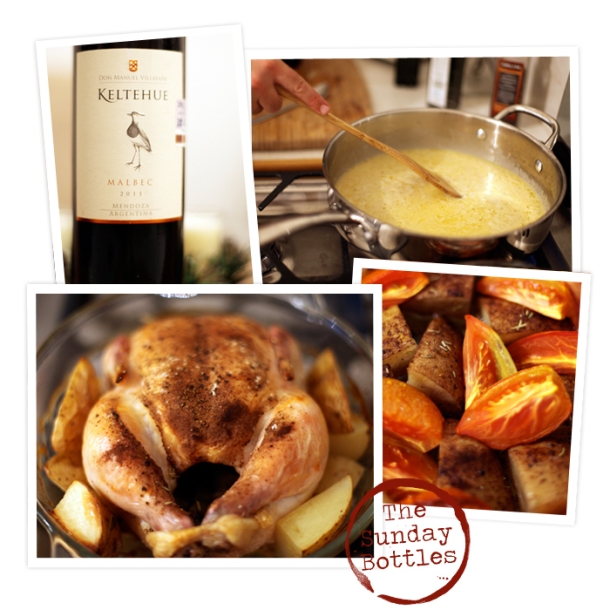 The palm trees are bearing fruit, the macaws are squawking in the jungle, and there is a smell of the ocean on the breeze.

Oh, and tacky crap is hanging in stores from every possible window, shelf, wall, and precipice.

In our house, we are slowly shaping it up to look half-way presentable for the Big Guy.  The girls – Cara, Caia, and Megan – decorated the tree (that we bought on Sunday morning … a week before Christmas … in the Caribbean … for $7.25 … Charlie Brown, anyone?) while Rene and I chatted with Rene’s parents after a meal prepared by yours truly.

And I only lost my cool once.

(Okay: twice.  Toddlers and gas ranges make me edgy, what can I say?  Plus the dogs are running around, bumping into everyone, trying to get at the chicken … And Megan made the cookies.  Shut up.)

This was a dry run for Christmas dinner.  Since we have a larger kitchen, it was decided (by Megan and I) that for everyone’s sanity (and safety, lest our knives find your legs and biceps for traipsing through our kitchen yet again to ask if you can help when all we’ve asked if for you to not walk into the kitchen!  Seriously!  It’s like, ten hours of cooking!  Get the fuck out of here!) Christmas dinner would be prepared at our house this year.  So, I made the chicken as if it were a magnificent bird deserving of only the tenderest of care.

The chicken was dusted with cinnamon, nutmeg, salt and pepper, and stuffed with cloves, bay leaves, cinnamon, nutmeg, and allspice.  Potatoes lined the roasting tray and it was in the oven at 200 degrees for about two hours.

The potatoes and tomatoes were given the same treatment but with a drizzle of honey and a about five knobs of butter thrown in to soften the acidity of the tomatoes.

In hindsight, the white we chose this week would have gone better with dinner, but we were really excited about the red, so we started with that instead.

Blueberries and cloves play on the palette in this wine (with a really classy label).  We hung onto this bottle for a couple of weeks (which is why we cannot remember the price) because the label told us it was going to taste great.  It was okay.  Kind of forgettable, really.

With some time and some air, this wine came around.  Also, the subtler flavours of blueberries and cloves complimented the fare nicely, so all was not lost.  We just weren’t that taken with it, is all.

We took a breather and decorated the tree and talked about the coming week and what a crazy couple of months it’s been and how nobody has really started their Christmas shopping yet and how nobody really wants anything this year anyway, and it’s really just about Caia and what presents we all get for her, but seriously, everybody needs something to open Christmas morning, so it was basically a lot of posturing by everyone because who isn’t going to buy anybody nothing at all anyway?  Then, the baby in bed, and the night winding down, we opened the second bottle and sat outside and planned for the holiday feasts coming. 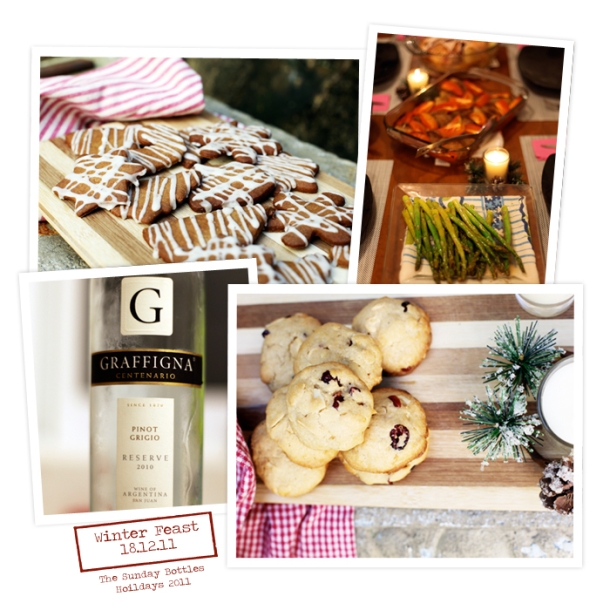 This was a lovely little Grigio and highly recommended by us for anyone who likes this varietal.  Chewy and very fruity, it carries itself well, staying away from the more citrusy Pinot Grigios we’ve tried in the paste, and instead favouring mango and peachy flavours.  The sweetness is tempered nicely with a tangy finish that leaves your mouth feeling zingy and not cloudy, as some sweet wines do.

Even though we may have enjoyed the Malbec from earlier more had we switched up the order of the two, sitting outside with the warm breeze and the night sounds, this wine fit the mood perfectly.

This next week is going to be a bit chaotic and we probably won’t get away with just one post, so look out for a few days of Christmas posts coming your way this weekend.

Also, I have three days off this week, which is almost unheard of, so there will be more time for us in the kitchen. 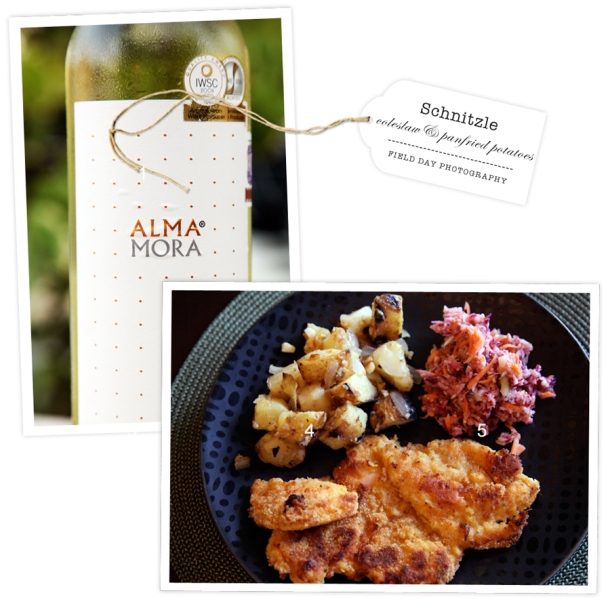 We go back to the land of the Argentine this week, keeping things light on account of the heat.  Then we made schnitzel.  With the oven.  Which is hot.  (It’s so hot here…)

We also made coleslaw, however, without mayonnaise, so that helped a bit.  Note to reader: using a food processor to chop onions is like rubbing your eyes with habaneros.  Sulphuric acid blends with the oxygen in the air becoming, I don’t know, chlorine gas, or something.  Megan and I were dancing around each other, mixing this, stirring that, with eyes and noses running, trying to find the sink through tears, occasionally stabbing each other with tongs, knives, and stepping on the odd dog paw or cat tail.  (Take note: Red onions seem to be worse than white.  Take bigger note: Don’t splash red onion juice directly into eyes.  That makes you scream a lot.)

Nothing more need be said about this dinner.  It was great.  Megan over-spiced the potatoes on account of the onion-blindness, mistaking cayenne pepper and cayenne pepper for cayenne pepper and paprika.  (Take note: Onion-blindness makes reading spice labels tricky.)  Which was fine for everyone but Cara, who finds tomatoes a little picante. I put kiwi in my coleslaw, which gave it a sweetness that the mayonnaise would have provided, but didn’t leave us feeling heavy and bloaty.  The schnitzel, Megan’s specialty, was awesome.  (The trick is: more butter equals more better.)

The wine went well with all things on the table.

Wine: Alma Mora, Pinot Grigio, Cosecha, San Juan, Argentina, 2009, $110 MXN
Rating: 1 ½ Bottles. ( I really want to come up with some visual symbols for out bottles to make it look cooler.  We’ll figure it out.)

Alma Mora, as far as we can tell, means Berry Soul which is kind of cool.  I think it would make a great breakfast cereal character.  Berry Soul, with blueberry, raspberry, strawberry, and gooseberry marshmellows.  Part of a funkay breakfast.  Skeedle-dee-bop-doo-WAAHHHH!!!!

Undertones of peaches and apples give a little levity to the citrus bite of this Pinot Grigio.  We also tasted a hint of pear.  Very light.  Great value.  This wine is perfect for those hot summer months.

So why the so-so rating?  Well, it’s perfect while it’s ice-cold.  Once it starts to come up to room temperature, however, a lot of its character dissipates and you are left with a flatter version of the zingy first impression.*  This is one of those wines that our mothers would put a couple of ice cubes into.  Maybe throw in a little Sprite or Perrier with Lime.  (Have I mentioned that we really don’t know anything about wine?)

As I said: perfect for those hot summer months.

Next week is up in the air.  Very busy busy these days.  Cara and I are buying a house.  Which is awesome, since the kitchen is big and has ample space for entertaining.  But first we need to buy a kitchen.  Which is a bit of a drag.  But also exciting.

I’m thinking the Twitter idea is a good one.  One of these weeks (maybe next week, who knows?  Eeee!) we’ll do it.  It would require considerably more wine than one bottle, I think.  You know, for the entertainment of it all.  For the readers.  For you.

*Kind of fitting, since that is exactly what happens to people’s descriptions of me at parties!  Cool guy … at first.  Once the abundant coolness wore off … I don’t know … kind of flat.  Wait, not flat – dickish.  Like a professor of Victorian Literature.  You know, knows a lot about stuff that nobody else has even heard of or finds interesting.