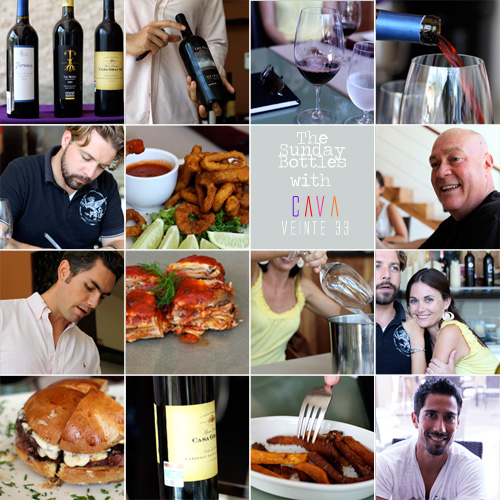 Four Mexican Wines.  Known for blending varietals in somewhat unorthodox ways.  Thus spake Demian. (Zarathustra being unavailable and generally unwilling to conduct wine tastings.  He’s such a pill.)  There were ten of us in total at Cava Veinte33 this past Saturday at one-thirty.  So proud, were we, to convince eight friends to join us for wine in the early afternoon.

And this is what we tasted:

Named for the winemaker’s daughter (he names all of his wines after important people in his life – mostly women), the soft flavours carry this wine across your tongue.  This is a slightly gamey wine, which some people have a hard time enjoying, but which I like quite a lot.

We were offered water to rinse with.  There was in a pitcher on the table.  Andrew took a sip of it.  Demian said that it was actually to rinse our glasses.  In a spit take that would have made Groucho proud, Andrew immediately let the water fall back out of his mouth and into the glass.  It was a triumph.  Seriously, one of the funniest things I’d seen all month.  And September’s been HILARIOUS.

(Rye?  Was that RYE I tasted on that wine?)  Tart, but smooth.  Strawberries?  (Rye?)  Spicy, it was decided.  Cloves and nutmeg, someone said.  Demian chose this moment to let us in on a secret about wine: there is no right call on what you taste in a glass of wine.  If you taste strawberries, then you DO.  What one person may taste, another may not.  This wine was the favourite so far, by most.  (I still preferred the first bottle.  I found it more agreeable.  I liked its quirks.  I liked that it was both gamey and sharp.  It made me think of Englishmen out hunting foxes or something.  Then that made me sad for the foxes, but I liked the camaraderie, nonetheless.)

We sat around, discussing what a tannin was.  I thought it was something to do with protein.  Cara and Megan weren’t sure.  Andrew kind of agreed with me.  Demian told me I was wrong.  So far, we were off to a good start.

We all tried to be appreciative of the wine without sounding like the wine was getting to us.  At this point, it was getting a little difficult to taste one wine from the other, but Demian chose well.  “This is the oldest winery in the continent.  It’s been making wine since 1597, taking only a short break when wine-making was outlawed by Spain around 1620.”  Why they outlawed wine had something to do with imperialism, and I had long since given up taking comprehensive notes.  This was a fitting wine for us to drink this weekend, however, it being Mexican Independence Day, which commemorates the start of the Independence War by Father Miguel Hidalgo y Costilla in 1810.  (Take THAT, Spain.  We’ll drink whatever wine we damn well please!)

Where was I?  Oh yeah: Demian chose well.  Each wine a little more intense than the last so that we would be able to pick up on the differences.  If he had gone the other way, we would have started remarking how watery the wine tasted.  I call it the Wedding At Cana Method.  Go ahead.  Steal it.

We should take a moment to pause here, and comment on the food that we were served throughout the day.

In true Cava style, the food came out at just the right time.  Namely, just as we were starting to feel a shade past tipsy.  Now, the purpose of this event was not to get drunk, but to try different wines and enjoy good company.  And, after three bottles, each of us had had just under three glasses.  Not quite three.  So, we were feeling SOME vapours, but not too many.  All the same, the food came as a pleasant foil for the wine.

The clear favourites were the Eggplant Parmesan and the Pastrami Burgers.  Subtle flavours for both, but I have to say, I am a sucker for hamburgers, especially when there is cheese involved.  But add a bed of pastrami and sauerkraut?  This was quickly becoming my favourite day ever.  (Well, next to the birth of my daughter and Obama being elected president, but a VERY CLOSE THIRD.)

Back to the wine … 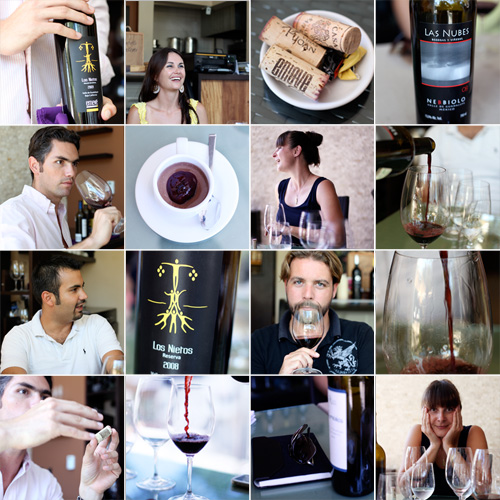 Maybe it was that we’d already blown most of our taste buds, but this wine did not agree with any of us.  A lot of minerals in the wine made it taste salty to most, and the higher level of tannins left a bitter, tart, dry mouth in all.  We didn’t have a lot to say about this wine.  One of the pricier bottles we tried, this was the least appreciated wine of the bunch by all of us.

This was to be our last bottle and we were trying our damndest to enjoy it.  Sensing this, and being the consummate host, Demian treated us with a fifth bottle.

This wine was much softer and fruitier.  (What do you know: we all like fruity wine.)  Strawberries and blackberries and dark red fruit made for a magnificent final wine to the day.  Doing the math, each of us had about a bottle each, which is a lot.  Our tummies full of food and libation, we felt like royalty.

The thing we liked about Demian’s tasting was that he educated us on the wines themselves – where they were from, how they were made, the philosophy behind each winemaker’s process – but he never told us what we should be TASTING in each wine.  He allowed us to discover if we enjoyed them or not for ourselves.  Cara tried to trap him, at one point, asking him whether there is a RIGHT way to taste a wine.  Whether there actually IS a true palette for each bottle.  Like, if a person tastes strawberries, could they be WRONG.  But Demian wouldn’t take the bait.  Instead, he asked her to leave.  (Just kidding, but he totally could have.)

And so our great Wine Tasting Event at Cava Veinte 33 came to an end.  As we spilled out onto the street, some smoking cigarettes, others picking fights, Megan, Cara and I smiled in appreciation for this wonderful life.

Our thanks to Demian and the entire staff at Cava Veinte33 for their hospitality.  Many thanks to everyone who shared the experience with us. 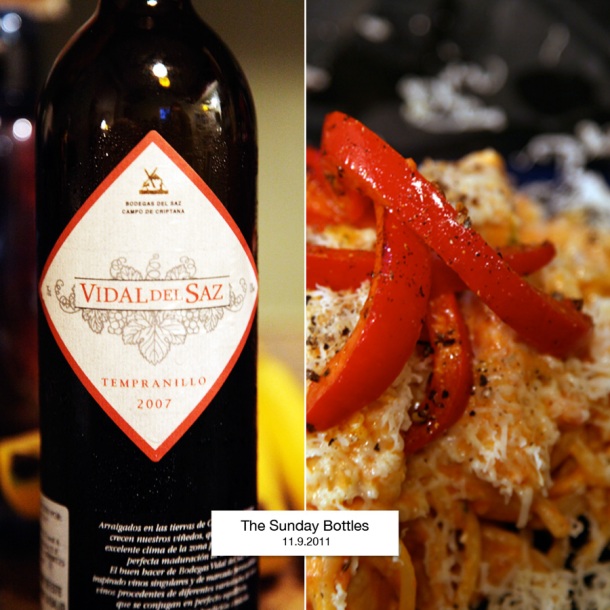 So, I guess I’m psychic.  Last week, I sent out an email update with a subject line that read: “New Pots!”  I got some really helpful emails from some of our readers, too.  (I’m being sarcastic.  You all suck.)

This week, I was to make risotto.  I like risotto.  It’s delicious.  It’s like savoury rice pudding.  It makes me happy to eat it.  But there is a good lesson to be learned, and that is this: if you buy cheap pots, your risotto will burn and you will get mad at your garbage can and you will kick it.  (Which, incidentally, is the name of a sitcom I am working on.)

So, my starchy bonanza was a bust.  I did get dubbed “King of the Cream Sauce” (which, incidentally, is the name of a male oriented movie I’m … and so on, and so on …).

So, I threw out that damn pot, and yes, I did mutter “Out, damn’d pot! out, I say!” maniacally to myself.

On the Menu: Chicken Spaghetti in a Tomato and White Wine Cream Sauce, No Risotto with Dill and Tomato

Megan and Rene pulled twelve hour days again this week and Cara was hard at work at her new job, learning the ropes, hauling tours, and just being awesome in general.  This Sunday, though, Megan and I would have the whole day to leisurely cook, sip wine, and make fools of ourselves.  And we needed it.  It’s been a long couple of weeks and we were really looking forward to a grownup day.  I hired the nanny so Caia would be looked after.  It was all planned out.

Then she got a call from a friend that his mom had fallen at a resort here in Playa and had broken her arm, shattered her wrist, and dislocated her elbow.  She needed surgery.  She was travelling alone.  Could Megan go sit with her when in the Recovery Room.  Hurt lonely friend’s mom trumps boozy afternoon.

Megan requested risotto as she ran out the door.  I was going to kick that risotto’s ass.  Then I remembered that I was a stupid and bought the cheapest pot in the world with the thinnest bottom and the stupidest shade of blue.  Honestly: who wants a robin’s egg blue pot?  It sucks.  Every time I think about it, it sucks more and more.

The chicken spaghetti turned out well, though.  And for the first time, in what seems like forever, we got a pretty nice bottle of wine for the evening.

Soft tannins and wafts of roses make this wine very smooth to drink.  Very mellow and flavourful.  Hints of orange and all spice.  It reminded us of Christmas.  A definite re-buy.  It was just the wine we all needed after a long week.  Plus, it was raining.  Perfect.

This week we are getting ready for the wine tasting at Cava Veinte 33.  If you still want to go there are a few spaces left.  Don’t wait too long, though — these things always go fast as the actual date approaches.

Just letting everyone know that we are down to six spots left for the exclusive Wine Tasting at Cava Veinte 33 on September 17.

If you want a spot, let us know soon!

Do not miss out on this!

Okay, y’all, the first ever TSB event is here!  We are inviting 12 of our closest friends to join us at Cava Veinte33, Saturday, September 17, for an exclusive wine tasting with Demian Fuentes.  We will be trying four wines paired with scrumptious treats.  We’ll learn a little about wine and (hopefully) enjoy the company of good friends.

“But wait: how can I be one of the chosen few?”

Good question.  You must be a TSB subscriber to attend this event, so subscribe now or suffer the pain of sitting at home on Saturday, September 17, with an unsatisfied palette and an empty stomach.

“But wait: what’s the guarantee that I’ll actually show up after I say that I want to attend?”

Remember: only 12 TSB subscribers can attend.  Once you have indicated that you would like to attend, you can get your tickets at Cava Veinte33, from Megan, or from me.

The awesomeness will start at 1:30pm.

We look forward to seeing you all (12) there!